Which group of user events correlates with higher retention rates?

This article helps you get started with the Metrics that Matter - Part II report from the User Retention Playbook. 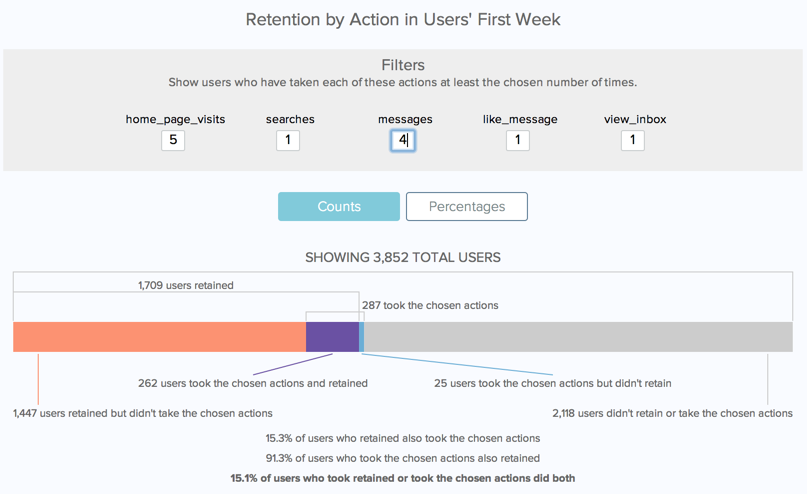 We recommend opening the report in another window or tab so you can consult the methodology and set-up steps as you explore the report. If you'd like a bit more of an overview of how Mode Playbook reports work generally, please read this article.

The Metrics that Matter - Part I report in this playbook helps find individual features that might matter for retention. But it's also possible that there are mixes of actions---two site visits plus a purchase, or three new followers and one new followee---that correlate retention even more. This report lets you explore those feature combinations, and how they relate to retention.

This report compares the number of times users' take actions in their first week to the likelihood that they return in their second week (7 to 14 days after they first sign up). For those interested in different length windows (maybe you want actions taken in their first three days, and care about 28-35 day retention), both of these windows are adjustable---the first 7-day window is defined on lines 23 and 24; the second is defined by line 34.

The actions you want to select are defined in the grey filter box. Enter a number for each action, and the report will update to show the overlap between retention and users who took each of those actions at least the chosen number of times. For example, suppose you have three actions---viewed_homepage, made_purchase, and invite_friend. If you select 2 for viewed_homepage, 1 for made_purchase, and 0 for invite_friend, the users defined as taking the chosen actions would only be those who viewed the homepage at least twice and made at least 1 purchase.

The graphic shows the overlap between these users taking the chosen actions and the users who retain. The bars, which are labeled in the graphic, mean the following:

Three lines of text are below the bars. The first line shows the percentage of users who retained who also took the action. Suppose that you're looking at one action: make_purchase. Suppose further that out of 100 new users, 50 users retained, 30 purchased something in their first week, and 20 users did both. This line would then show the number of users who retained and purchased something (20) divided by the number who retained (50)---which would read 40%.

The final line shows the amount of overlap between retention and this action. Mathematically, this is calculated as the number of users who retained and took the action divided by the number who did either (graphically, it can be thought of as the size of the purple bar divided by the size of the purple, blue, and red-orange bars put together). The higher this number, the more strongly this feature correlates with retention.

This report allows you to uncover a few things. First, by entering different combinations of numbers, you can find which combinations of actions actions are most common among new users, and which are rare.

Using this with your data

The names of these events also have to be defined in the query, in the final SELECT statement. For each event you define in the event table that you want to consider, you should add a line to this SELECT statement like the following:

One part of this query can be database-specific. For details on how to adapt these to your database, see our Database Notes.