Is Seed Round Funding from VCs Good for Startups?

Tom Tunguz of Redpoint Ventures recently wrote an interesting article on the effect the well-documented boom in seed funding is having on startups and VCs. He argued that the number of companies receiving seed financing has taken off, that many VCs are now involved in these deals, and this involvement has generally been beneficial for VCs.

As a recently-minted entrepreneur, I immediately wondered what that trend meant for startups. Are companies that are backed by VCs in their seed round more likely to succeed than those that aren’t? Or is it actually harmful, because big VC firms can scare off future investors if they decline to follow-on in the next round?

To answer this question, I turned to CrunchBase, which provides data on over 180,000 startups and their funding activities. Though this dataset surely suffers from many of the same problems as other user-curated data, it’s large enough that it probably does a sufficient job of sketching the general contours of the market (and, to my knowledge anyway, it’s the best publicly-available data out there).

CrunchBase’s data confirms the major trends that Tunguz and many others have identified. As the chart below shows, the number of companies receiving seed investments has been on the rise for several years. 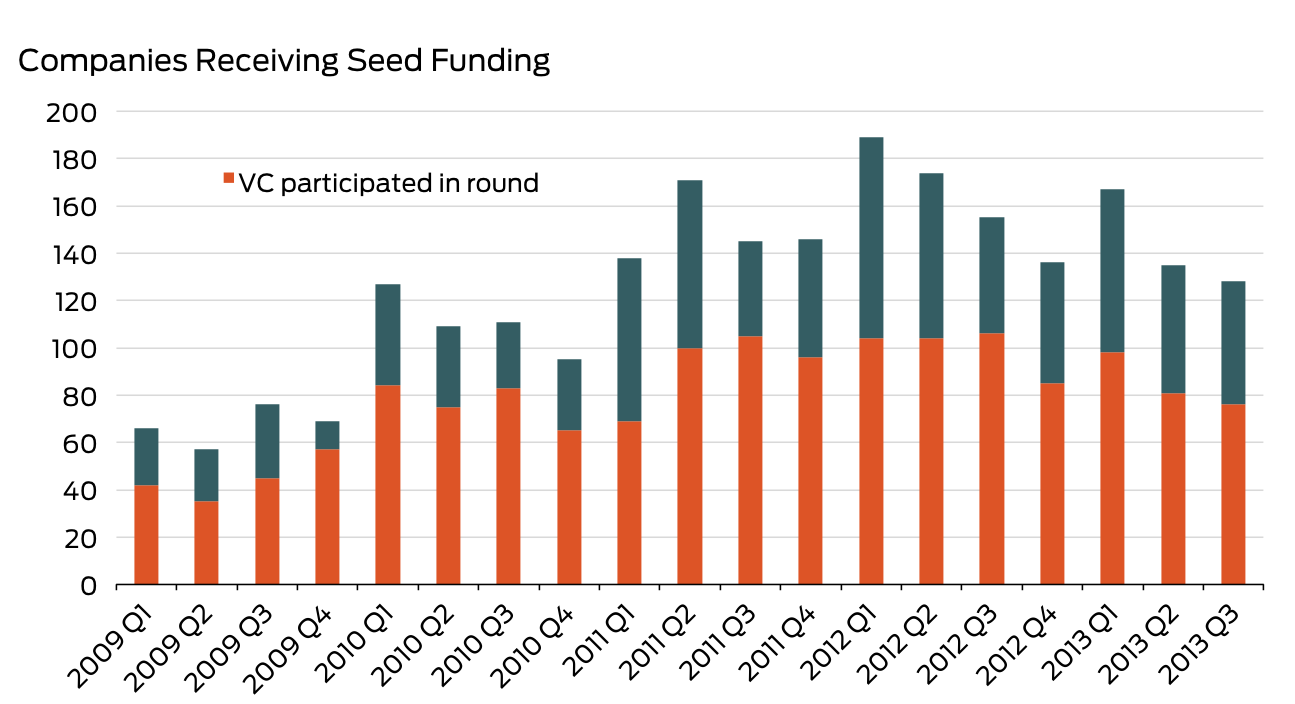 For clarity, here’s how I’m defining both a seed round and a VC:

Using these definitions, seed funding has clearly accelerated. Unfortunately, without more information on companies that are unable to raise money, it’s difficult to say why seed funding is rising. It could be that VCs are flush with cash and investing in lower-quality companies; it could be that more people are starting companies, and the market is responding to an increased supply of high-quality startups; or it could be that low interest rates have left investors desperately seeking high returns, and VCs and other non-traditional investments have been the beneficiaries. 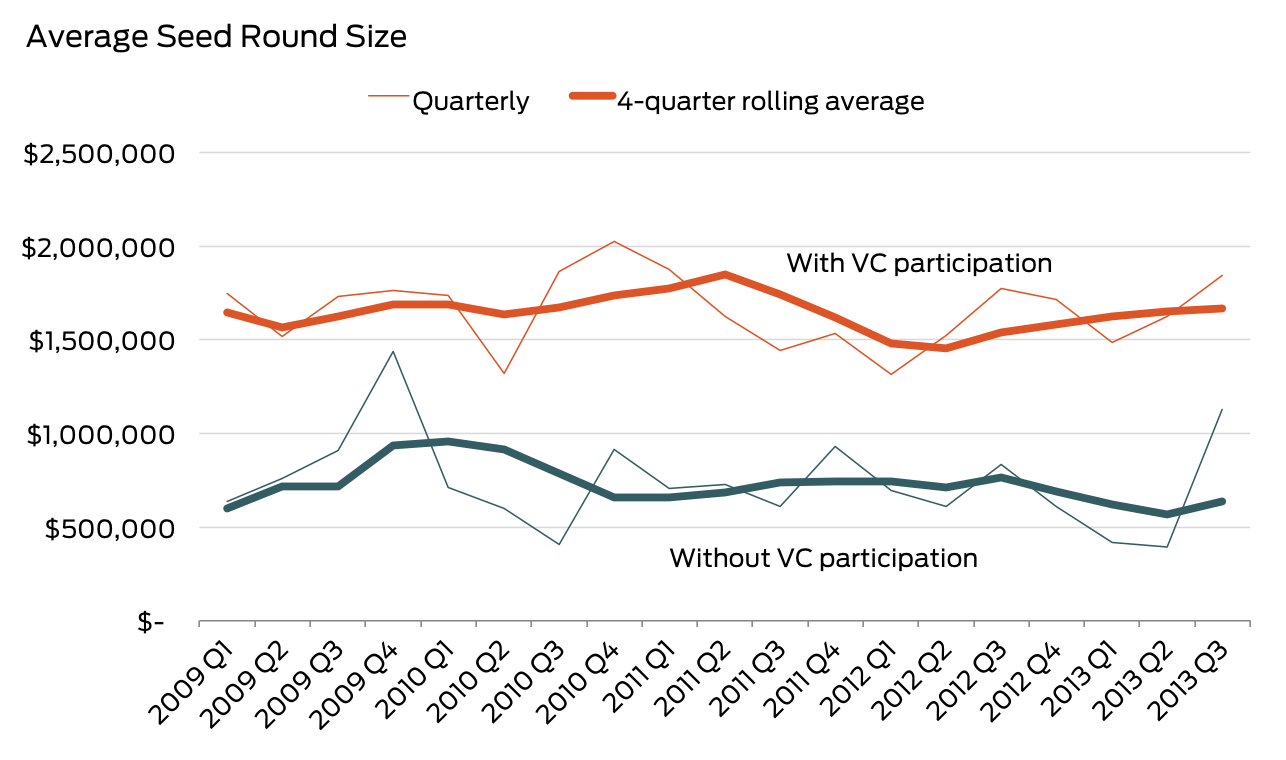 As a short aside, it’s worth noting that a major cause of this is likely the improvements in the U.S. economy—and specifically, U.S. financial markets—over the last five years. When arguing that the exuberance of the seed market and strong stock market performance are indicative of a bubble, it’s important to remember that 2009 was the worst year in the global economy in 70 years and comparisons with that year as a baseline should be made with caution. Moreover, even from the depths of that crisis, the Nasdaq is up “only” 140%, while the S&P 500 is up 100%. In the 5 years prior to the collapse of the last tech bubble in 2000—which wasn’t preceded by a recession—the S&P 500 was up 190% while the Nasdaq was up over 500%.

Regardless of its cause, seed funding—both from VCs and others—is on the rise. Is that a good thing for startups?

If nothing else, VC seed investments are larger. As shown in the chart above, seed rounds that include VCs are typically two to three times larger than seed rounds without them. Other things equal, most startups would prefer a large round to a small one. But unfortunately, we have no way of knowing if other things actually are equal (they probably aren’t), so it’s difficult to conclude much from this alone.

Outside of raising more money, entrepreneurs may include VCs in their seed round because having the backing of an established, well-funded institution could make it easier to raise money again. Interestingly, this doesn’t seem to the be case: The percentage of companies getting follow-on investment are roughly the same for companies that take a seed round from a VC compared to those that don’t. In fact, companies that take no seed round receive follow-on investments at about the same frequency as well. 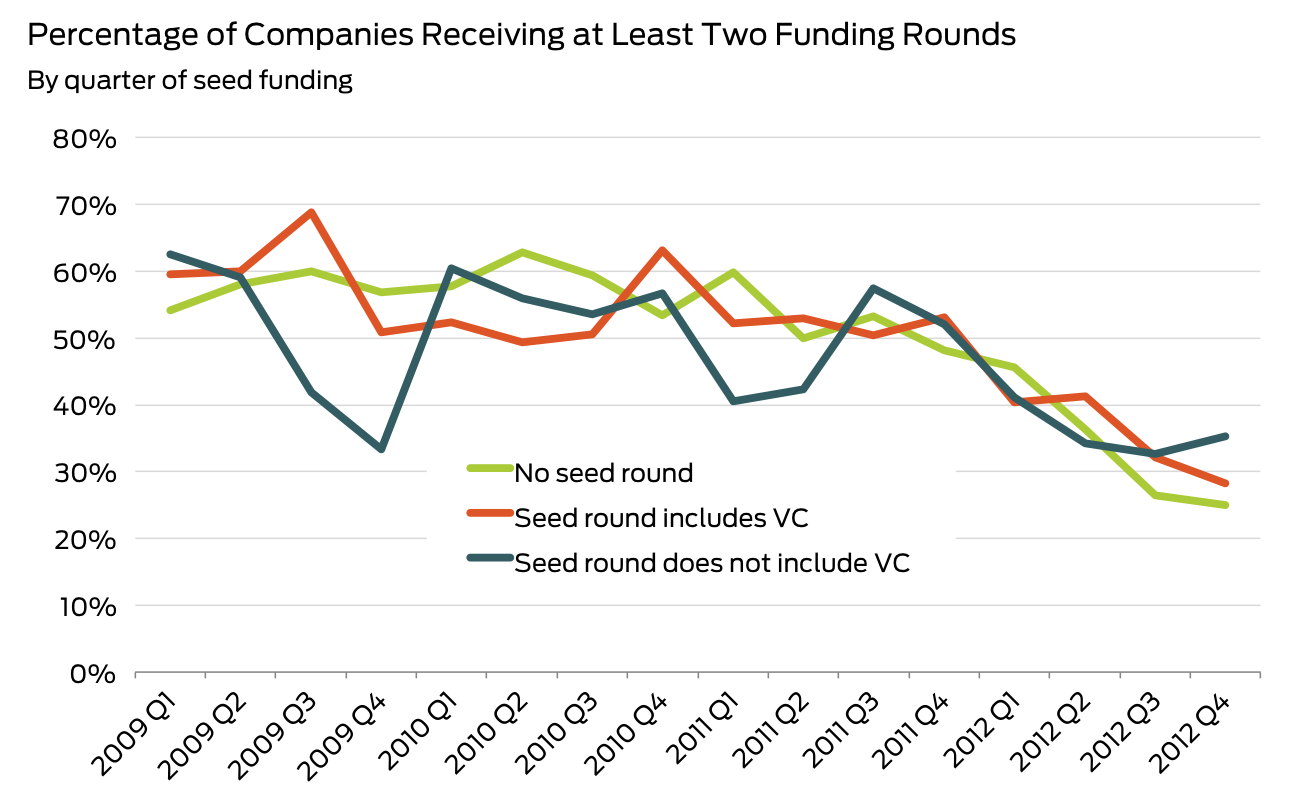 However, these equal follow-on rates may be an illusion. Because VCs tend to fund larger rounds, VC-funded companies may be able to wait longer before they raise their second round, which distorts the comparison in the graph above. For example, as the graph shows, 40% of companies who raised a seed round in the first quarter of 2012 have successfully raised a second round. However, because traditional angels invest smaller amounts, 80% of companies funded by these investors in that quarter may need to raise more money by now. For companies that raised larger VC-funded rounds, perhaps only 60% already need additional funding. This would imply a 50% success rate for traditionally-funded companies, and a 75% success rate for VC-funded companies. Of course, though this might seem plausible, it’s impossible to know for sure without more information about unsuccessful attempts to raise money.

Even if the follow-on rates are actually equal, there are still other potential benefits to raising VC-seed rounds. Because all follow-on investments are not created equal, the type of seed investor may not affect whether or not companies get additional funding, but it may affect if the size (and terms) of the second round.

This scatterplot of all 900 companies that have raised at least two rounds since January 2009 illustrates that point. While it clearly shows the differentiation in first round sizes by investment type—seed rounds with VCs tend to raise more initially—the relationship between first and second round funding tends to be the same, regardless of investor. If this weren’t the case, the different color clouds would be separate rather than overlapping. 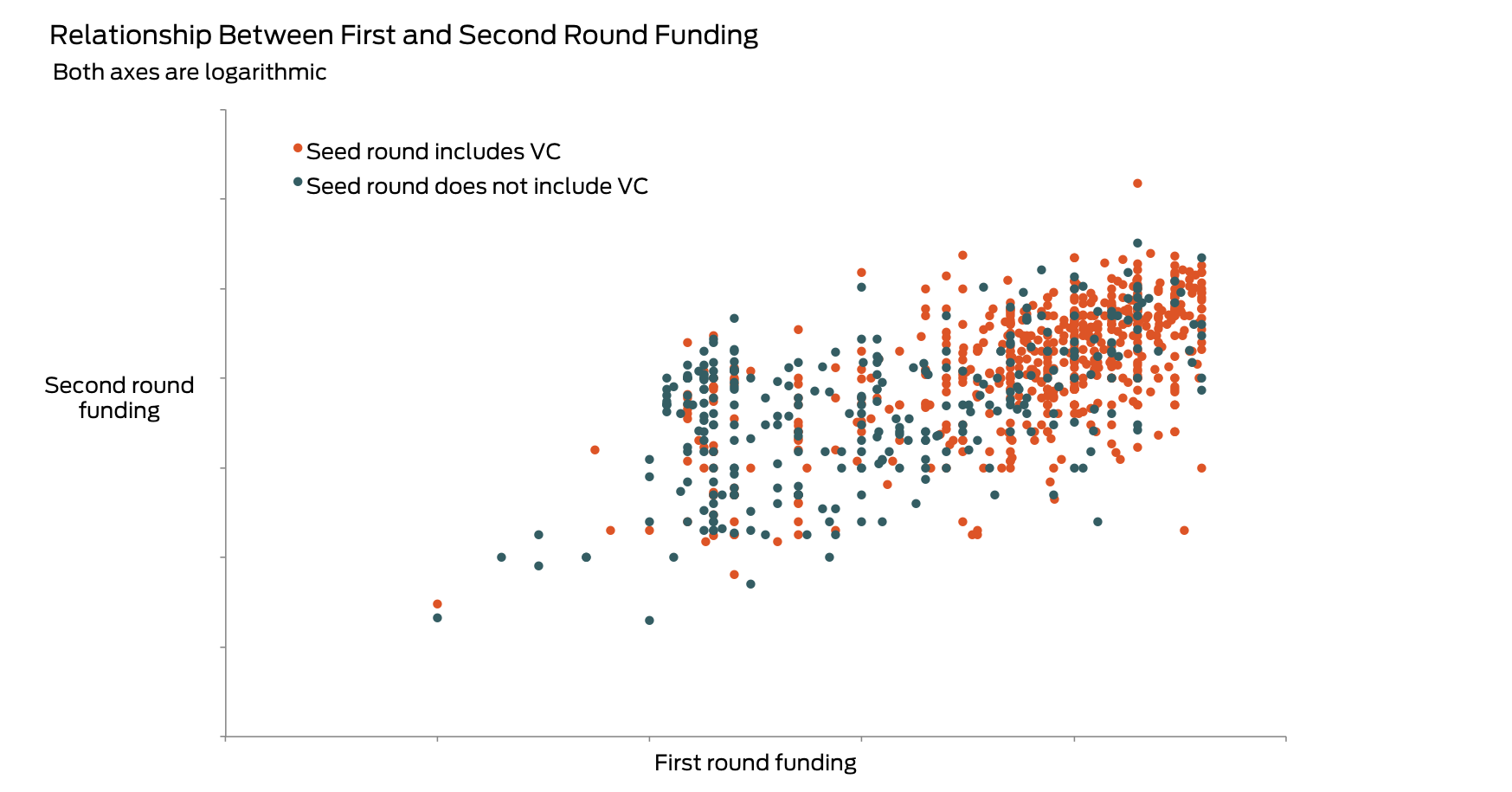 So what does all of this tell us? The only clear benefit to entrepreneurs for raising a seed round from a VC rather than traditional angels is that round tends to be larger. Outside of that, the benefits a VC brings to a seed round appear marginal. If nothing else, the differences between companies that elect to raise from a VC are much greater than the differences between the groups of companies that go to VCs and those that don’t.

I downloaded CrunchBase’s data from this Excel export. Each spreadsheet from that file was loaded into a PostgreSQL database. The raw CSV files, the queries that manipulated the data, and the graphs shown above can all be found in this Github folder.