2013 was a huge year for Macklemore. After rapping for 12 years in obscurity, he broke out last year, landing three songs on Billboard’s year-end Top 100 chart including the number one hit, “Thrift Shop.”

After such a strong debut, is Macklemore the next great rapper? (Spoiler: That honor actually belongs to T-Pain.) Or is he the next Daniel Powter? In 2006, Powter also debuted on the Top 100 with the most popular song of the year, “Bad Day”—but he hasn’t cracked a year-end list since. If Macklemore is headed for greatness, what about Gotye and Carly Rae Jepsen? These two artists debuted at one and two on last year’s Top 100, but neither appeared on this year’s chart.

In other words, what are the odds that this year’s most popular artists will be back on top again? And if they don’t make it this year, are they unlikely to ever be back? When can we declare them one-hit wonders?

Surely Billboard, the apparent arbiter of pop music, must know. Sadly, their look at this year’s Top 100 “by the numbers” mostly consists of a word cloud and Bruno Mars' hair, so we’re left to answer this one on our own.

The Odds of Making it Back

Billboard has been releasing an annual year-end Top 100 since 1956. Based on this data (which spans nearly six decades), the chance of any given artist returning on the Top 100 is fairly low. Only 36% of the 2,627 artists who’ve appeared on the Top 100 returned to the list after their debut year. Only 7%, or 187 artists, made the list in five or more different years. (However, these artists accounted for 34% of entries on the Top 100. This might explain why the pop music industry seems so insular, always elevating the same artists to the top and playing the same people on the radio.)

Overall rates such as these, however, aren’t that informative. Some artists like Macklemore have multiple highly-ranked songs in their debut year; others like Randy Houser, whose only Top 100 hit was 98th on this year’s list, have weaker debuts.

Unsurprisingly, higher chart positions and more debut songs are correlated with future success. 45% of artists who debuted in the top 10 returned to the Top 100 at some point in the next five years. By contrast, only 20% of artists who debuted between 91 and 100 ever returned. Interestingly, as the graph shows, slightly more artists debut at the top of the chart rather than the bottom.

It’s worth noting, however, that analyzing performance by year-end positions can be mildly problematic. Because Billboard’s Year-end list ranks songs by radio plays and sales data, songs that became popular at the beginning of the year will likely, on average, rank higher on Billboard’s charts than those that became popular at the end of the year, which have had less time to accumulate sales and radio airtime. By splitting their sales and plays between two years, chart positions of late-year releases probably aren’t a true reflection of songs' popularity.

The other impressive part of Macklemore’s 2013 debut—having three songs in the Top 100—also bodes well. While artists with one song in their debut year have a 28% chance of returning in the next five years, those with two return 57% of the time. Artists with three return in 81% of cases. And of the sixteen artists who have had four or more songs in their debut, all of them reappeared in future Top 100s.

Considered together, these figures (as does the current position of his latest hit, “White Walls”) suggest that Macklemore is headed for a good 2014. For Gotye and and Carly Rae Jepsen, who both failed to return to the Top 100 in 2013, the future is more uncertain. Of the artists who debuted in the top decile, 25% of those who returned to the Top 100 did so after missing the list in the following year. If they don’t resurface if 2014, is all hope lost?

It doesn’t appear to be, but both new and well-established artists can be quickly forgotten after a few years. The grid below shows the likelihood of an artist returning relative to how many hits they’ve had and how many years have passed since their last hit. Artists with only one previous hit only return 10% of the time after a three-year absence. Even for artists with many hits, the likelihood of returning after a gap of that length is about 25%.

When will Eminem, Anna Kendrick, and Three Doors Down all be gone? When we don’t hear from them for 3-5 years.

The chance of an artist returning appears much more strongly defined by the time since their last hit than it does by the number of previous hits they’ve had. This suggests that, even for prominent superstars, staying relevant after a hiatus from the charts is tough.

Importantly, these calculations ignore song releases, so it’s possible that a number of artists missed the charts in some years because they didn’t release any new music (this was the case for Gotye and Jepsen in 2013). Though release data would strengthen these results, it requires a great deal of effort to connect song releases to artist names (If anyone has this data or knows of good sources, I would greatly appreciate any information!).

The Next Five Years' Top 25

Since the music industry loves charts, why not make one more: The best artists of the next five years. To do so, I constructed a simple model that estimates the probability of an artist returning to the Top 100 at some point in the next five years, using the results above and several additional inputs:

Of these factors, the time since the last hit provides by far the most explanatory power (this reinforces the conclusion in the previous section). While all variables have a “statistically significant” impact, the number of total hits and the number of debut songs are the only other inputs that have any meaningful impact on an artist’s chances of returning to the Top 100.

The Top 25 artists with the highest probabilities of reappearing on the Top 100 in the next five years—along with a few other famous artists—are shown below. 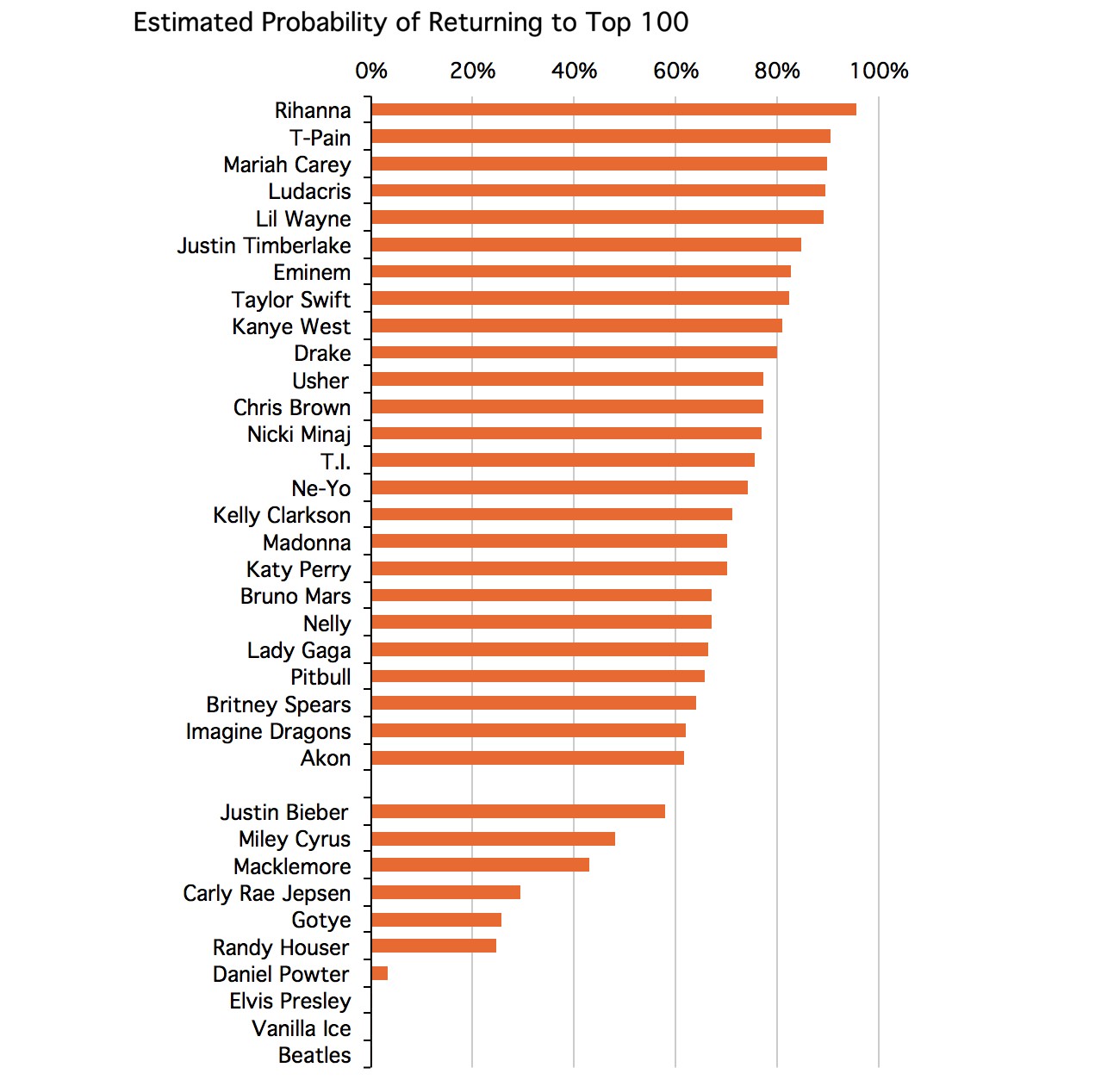 The list finally confirms what we all suspected: T-Pain is an unstoppable musical colossus whose ascent to the pop music throne is all but inevitable.

The Times They Are A-Changin'?

In all this analysis, one critical component is missing—time. The way the industry functions now, with most listening coming from Spotify, iTunes, and YouTube rather than record sales, has almost certainly changed how pop artists' careers progress.

Modeling how this trend is affecting music is challenging, in large part because it’s still relatively new. But another trend that’s easier to identify is worth noting: In the last decade, there has been a substantial increase in the number of songs that are performed by multiple artists. 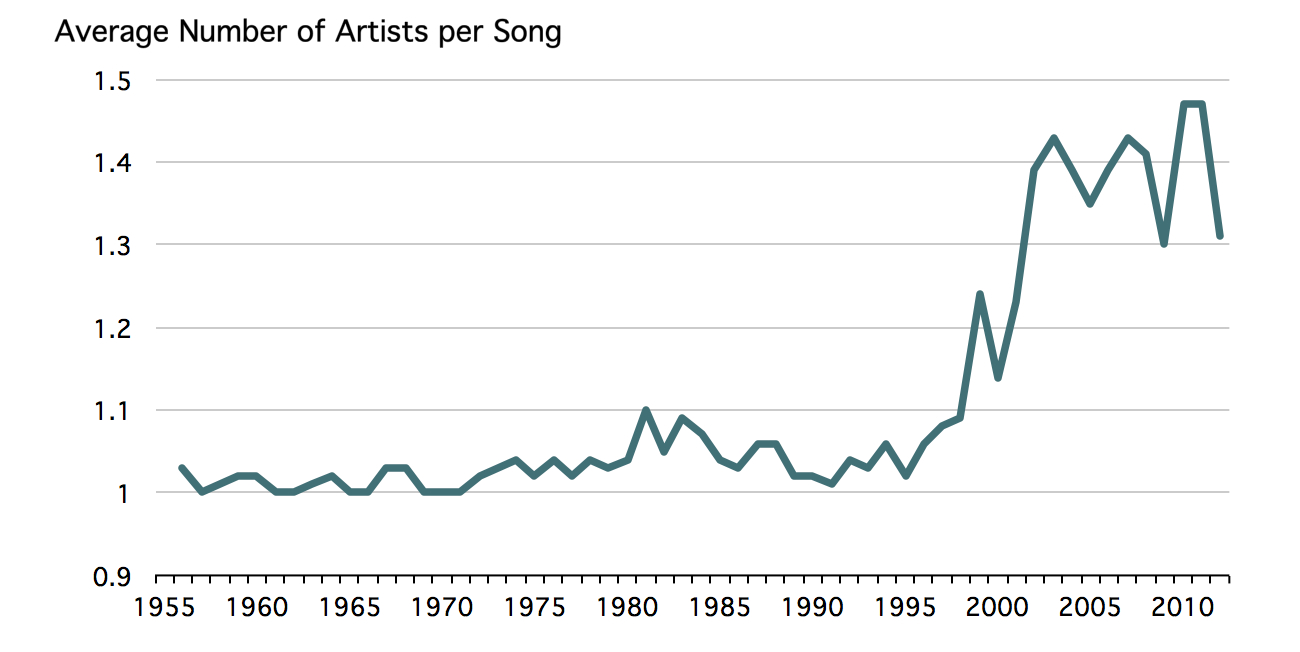 This trend could affect how artists’ careers age. Established musicians may be able to collaborate with up-and-coming artists to remain relevant, while younger artists may see performing alongside an established pop star as a way to get recognized earlier.

Collaboration is having a particularly noticeable impact on the top of the pop music industry. The list below shows the artists with the most entries on Billboard’s year-end charts. By this metric, Ludacris, rarely discussed as one of the best rappers of all time and never considered among the best artists ever, is the 5th most popular musician of the last six decades. The Beatles are 7th. However, over 75% of Ludacris' appearances have been with collaborators while the Beatles have only performed alone. 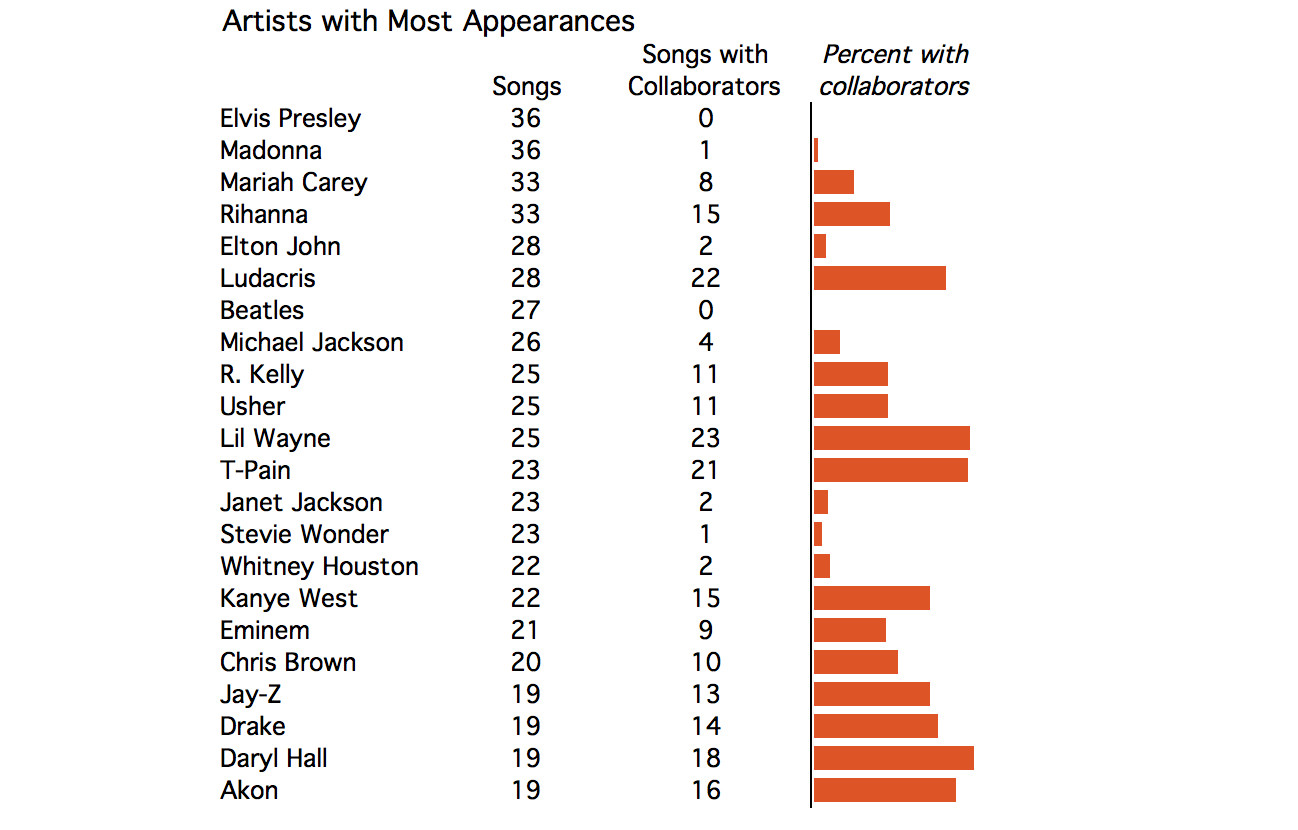 For artists looking to produce more hits, this raises an interesting question: Are artists like Ludacris and T-Pain successful because they help make better music than others? Or do they do an exceptionally good job of identifying songs that will be popular anyway? Or perhaps they simply contribute to a massive number of songs, a few of which are bound to be winners? Admittedly, it’s a cynical way to think about musical art, but for performers looking to avoid becoming the next Los del Rio, these could be important questions.

One of the trickiest parts about analyzing data on music is defining a musical artist. For this post, artists can be bands or individuals, depending on how the song credits them. Moreover, a single song can also be performed by multiple artists. For example, one of the top songs this year’s list, “Get Lucky,” was performed by two artists, Daft Punk and featured Pharrell Williams, even though one artist is a duo and the other is an individual.

Data was collected from bobborst.com using a Python scraper. Once data was collected, it was analyzed using SQL in a Postgres database. The prediction model was constructed in R, and data was graphed in Excel. The raw data, Python script, SQL queries, R code, and Excel charts are all available in this GitHub folder.

July 2014 Update If you're interested in exploring this data further, the data sets are now available on Mode here and here.

KPI Metrics Tracking & Reporting: Everything You Need to Know