The World Chess Championship 2018, a match between reigning champion Magnus Carlsen and challenger Fabiano Caruana, just came to a conclusion in London. Since all twelve classical games were drawn, the players entered a tiebreak round, where Carlsen was crowned world champion. This is the first time all classical games have been drawn, and many chess fans expressed disappointment in what seemed to be a “dull” or “bloodless” series of games.

Why do recent World Championship games appear to be less exciting than in the past? One reason might be that chess engines have made it possible to quickly calculate possible moves in advance of a match, making today's play much more precise than before.

To test this hypothesis and see to how chess has evolved, we took a look back at the World Chess Championship's 132-year history. We analyzed every move played in a World Chess Championship game (over 82,000 moves in total!) using the Stockfish chess engine. For every turn, we used Stockfish to calculate the difference between the move that was played and the best possible move that could have been played, according to a unit of measure called a centipawn. A centipawn is equal to the value of 1/100th of a pawn, so 100 centipawns = 1 pawn. But a centipawn represents more than just a pawn or piece - it's a value representation of advantage, which also takes into account the position and opportunities for both sides. 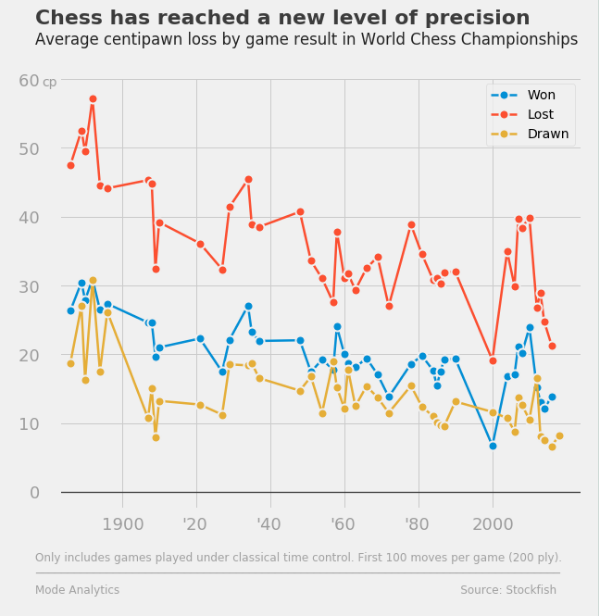 We found that moves played in World Chess Championship games have become remarkably precise, and increasingly so. This trend is not new, but it has accelerated in the last decade. This acceleration is generally chalked up to improvements to chess engines (like the one used to complete this analysis), which allow top players to analyze new ideas and variations much faster during their training.

In this year's championship, we saw an average centipawn loss under 10 for the entire 12-game match. While this level of precision made for boring chess in the eyes of some humans, the computers must have loved it.

For example, Game 7 of this year’s match featured an average centipawn loss of only 5 for Carlsen and 4 for Caruana. To see for yourself, play through the game in the visualization just below by using the play, forward, or back buttons on the bottom right:

Another interesting effect of this trend toward extreme precision is that the margin of error has shrunk considerably. Since a game of chess begins from an equal position, a player is only able to win when their opponent makes a mistake. When we compare the delta between the average centipawn loss for the winning and losing side over time, we find that a much more minor mistake today (i.e., a lower centipawn loss) could prove to be far more decisive to the outcome than a mistake of equal centipawn loss value made in years past: 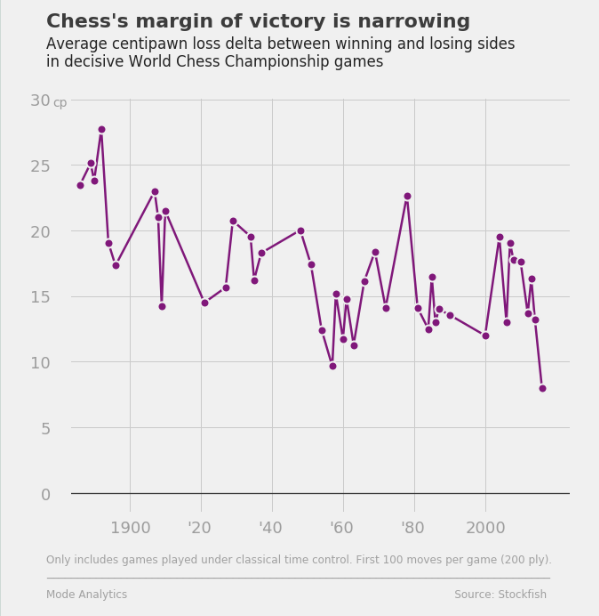 We could see this trend in action in Game 10 of the 2016 World Chess Championship, between Magnus Carlsen and Sergey Karjakin. The game proved to be a decisive win for Carlsen despite a mere 5 average centipawn loss difference separating the two players:

In the past, an average centipawn loss of less than 10 was rarely enough of an advantage to win. One particularly colorful example is Game 9 of the 1957 World Chess Championship. After Vassily Smyslov's 32nd move, his opponent, Mikhail Botvinnik, had an advantage of 690 centipawn, but missed the winning continuation and the game ended in a draw:

For those who are bored by the ever-more-precise style of play that the computers love, you might be more interested in Fischer Random chess (aka Chess960), where the starting positions are randomized and players have to rely on creativity and improvisation.

Ironically, though, you'll be stuck with the same champion for now: Carlsen is also the reigning king in this style of play. Some people are just too perfect.

Have questions of your own about World Chess Championship play? Explore this dataset for yourself in Mode's Public Warehouse, or write us at hi@modeanalytics.com — we love hearing from you!