A few months ago, Stack Overflow confirmed what many people have been predicting for years, and crowned Python king of the software jungle. According to the results of their 2017 survey, Python is currently both the fastest-growing language and the most visited Stack Overflow tag.* 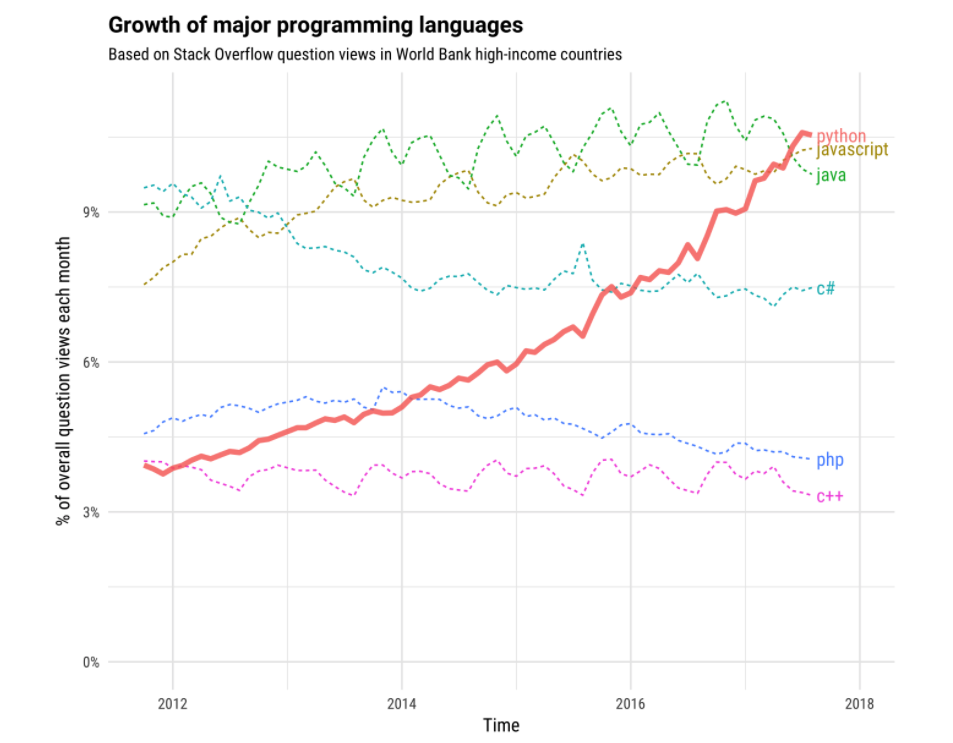 Python's well-developed ecosystem of scientific computing libraries (like NumPy, SciPy, and pandas) lets analysts use Python for solving all kinds of problems. You can pull, clean, and manipulate data in Python, or run statistics, models, and predictions. Python notebooks (available natively in Mode) have drawn lots of fans among analysts since they make literate programming (in which you present code or results surrounded by contextualizing prose) easy.

Whether you're just getting started with Python for data science, or you're already a pro Pythonista, listening in on conversations among influencers in the community is a great way to stay up to speed. We've compiled a list of the people we follow most closely in the Python data science community. If you want to stay in the know, too, here are 7 people you should follow on Twitter.

New post: @ApacheArrow and the "10 Things I Hate About pandas" https://t.co/2G46xS6bm0 #pydata #longreads

There's nothing like real data to surprise with odd artifacts or strange fields. What's the weirdest thing you've seen in a data set lately?

Idea: Jupyter notebooks could have a "reproducibility mode" where:
1) Code cells are read-only once executed
2) New code cells cannot be inserted above previously executed cells
3) No cell can be executed until all previous cells are executed

Colaboratory looks like a great new tool from #Google: Now you can run Jupyter Notebooks in a Google Docs-like environment. No local install required.

Are there Python data science influencers you think we should add to this list? We'd love to hear who you follow! Reach out to us on the forum, where you can talk to other analysts and data scientists and compare notes.

*This statistic applies to tags in high-income nations only.