How to Create 100,000 Parking Spots in San Francisco

“If all the planets are properly aligned, if you’re holding your mouth right and if you avoided walking under that ladder, you might, just might, be able to find a parking space in San Francisco.”- Someone named Jay

Sadly, Rudyard Kipling got it wrong. San Francisco has two drawbacks: ‘tis hard to leave, and parking. The pain parking causes San Franciscans is widely documented, and can evidently be so severe that it drives people to attempt crazy things, to write crazy things, and, in one tragic instance, to kill each other.

Rather than blame a lack of space, steep hills, or quick-triggered parking attendants for these problems, we should blame something else: driveways. As anyone who’s tried to park in San Francisco knows, not only are driveways a tease (“Finally, a spot?…Could it be…I think….it is……a driveway.”), but their haphazard arrangement also wastes a tremendous amount of space. Because driveways appear to sit randomly in front of houses, the gaps between them are often too small for a car, which leaves large portions of curb space unused - or encourages some, like Svbtle writer Brian Mayer, to push their luck.

But it doesn’t have to be this way. 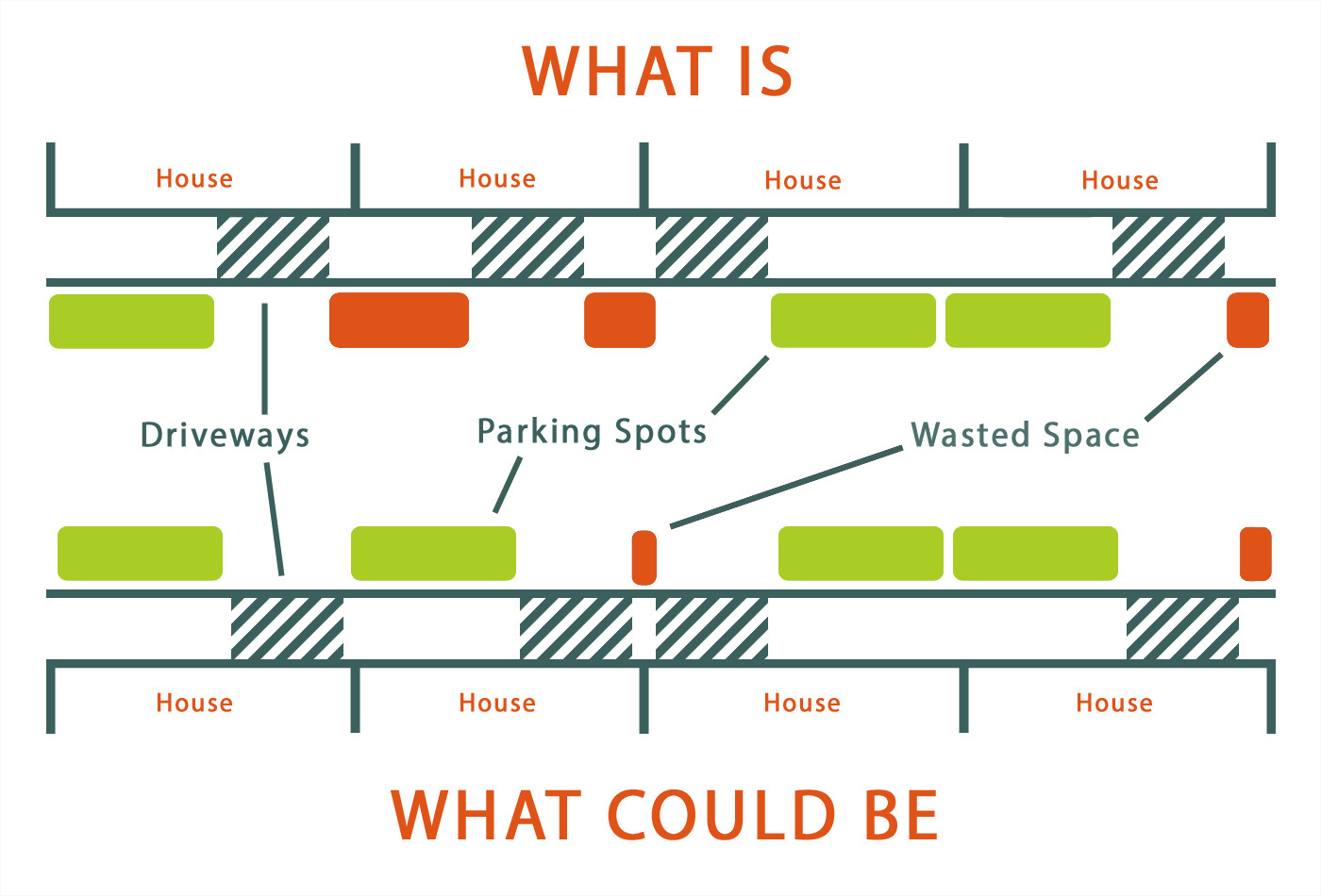 Unfortunately, rearranging all the driveways in San Francisco probably isn’t feasible anymore. As new apartments and houses get built and new neighborhoods are developed, however, San Francisco - as well as other cities with limited space for parking - should consider ways to organize driveways that benefit both drivers and homeowners.

I started with a few basic assumptions:

For each block, to account for differences in block size, house size, and other variables, each input is allowed to vary randomly by 10%. Once these inputs are decided for a particular block, I determined how many spots can fit on that block with randomly positioned driveways and with optimally positioned driveways. In both models, the same number of houses have the same number of driveways; the only difference is the driveway arrangement.

Because there are assumed to be 3,700 residential blocks in San Francisco, this calculation is repeated 7,400 times using the long block length (corresponding to the two long sides of each blocks) and 7,400 times using the short block length (the two short sides of each block). Summing the number of parking spots on the 14,800 curbsides around these 3,700 blocks provides a city-wide total.

The entire calculation can be recreated by running this Python script. If you want to adjust some of the assumptions and see what the totals look like under different scenarios, inputs are clearly marked at the top of the script.

Of course, some of these assumptions may be oversimplifications. Different cars require different amounts of space to park, which means some the larger unused spaces could actually be occupied by small cars or motorcycles. Also, because driveways have to fit to the house behind them, it may not always be possible to arrange driveways in an optimal way.

Nevertheless, the potential for improvement is clear. More parking could save San Franciscans from untold hours of stress. And if nothing else, because many of us aren’t as good at parallel parking as others, we could at least use a little extra space.

Are there questions you’re interested in exploring? We're always looking for new datasets and cool problems to write about. If you have questions that you think could be answered with data - on topics ranging from Miley Cyrus to Hyperloops and perfect games - feel free to send us your questions at benn@modeanalytics.com

FiveThirtyEight vs. The Oddsmakers