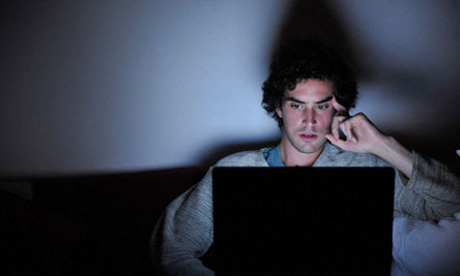 Two weeks ago, Miley Cyrus released her newest single, Wrecking Ball, on YouTube. The video, like her previous single We Can’t Stop (which was analyzed in an earlier post), was greeted with poor fan reviews. But after the video became the most instantly popular YouTube video in history, I couldn’t help but wonder about the future of YouTube.

In its first 24 hours online, Wrecking Ball was viewed 19.3 million times. This was a 50% increase over the previous one-day record set just three months earlier by One Direction.

Though Cyrus' video likely blew up for obvious reasons, its demolition of a three month-old record raises an interesting question: Is it possible that sharing on the internet has become so frictionless, and people have become so instantly connected, that the viral cycle of a video now lasts days and hours, rather than weeks and months? Jokes about Gangnam Style, which was released in July, lasted well into Halloween; will Wrecking Ball memes even last until the end of the month?

Today’s most popular YouTube videos suggests they may not. To find popular musical artists to compare with Cyrus, I looked at the 20 artists that have videos among YouTube’s top 30 most-viewed videos of all time (this includes Cyrus, for Party in the U.S.A., at number 24). I then looked at the viewing patterns for the 30 most-viewed search results for each artist.

Of the 600 videos considered here, 36 were uploaded this year. Those have averaged nearly 900,000 views a day, compared to less than 175,000 last year, and under 110,000 in years before that. By contrast, monthly YouTube usage grew by “only” 25% in the last 18 months - from 800 million people to 1 billion. Clearly, things are spreading much faster than before (or we just like watching videos on repeat).

There are, however, a couple glaring problems with this conclusion:

To correct for this, I adjusted each video’s age so that older videos wouldn’t be penalized for not getting views long after they were uploaded. The adjustment implies a viewing pattern similar to the one seen here where about half of the three-year-old video’s views came in the first year.

This is a trickier problem to fix, but to limit the analysis to videos likely to be immediately popular, I only considered the top 20 most-viewed videos of each year.

With these two adjustments, daily views of top videos are increasing at a much slower rate. But this year still saw a rate of increase that well outpaces YouTube’s user growth.

If daily views continue to increase at this rate, within two years, the top YouTube videos will be seen nearly 6 million times a day, while the most popular video could be seen as many as 60 million times in its first 24 hours. That’s a big number, but still ten times less than peak daily audiences for global television events, such as the World Cup. While Wrecking Ball’s growth was impressive, YouTube has a lot of room to grow.

Despite the popularly of Wrecking Ball, the video - much like We Can’t Stop, wasn’t particularly liked: About 0.5% of the people that watched it disliked it. By contrast, Eminem, another artist who doesn’t exactly shy away from controversy, released a new video on the same day as Wrecking Ball and only received dislikes from about 0.06% of its viewers.

Wrecking Ball’s and We Can’t Stop’s poor scores mirror Cyrus' broader struggles with the YouTube crowd. Among the 20 artists mentioned above, Miley’s videos are the second-most disliked, ahead of only Justin Bieber. (Surprisingly, Eminem’s videos are the best reviewed. Like a magician, critics he turns into crickets, I guess.) 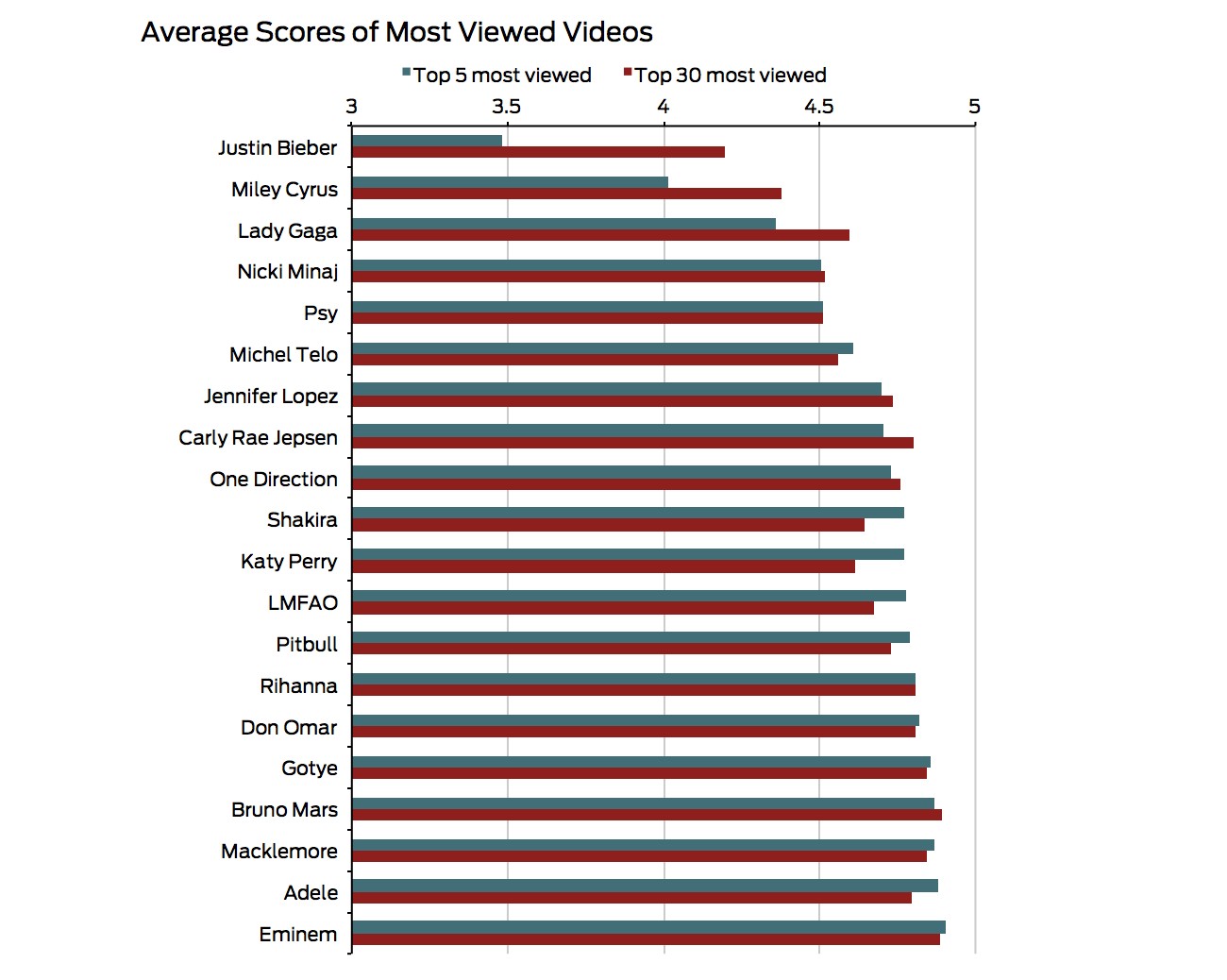 Eminem and Adele - the odd couple atop the YouTube music scene

Interestingly, if you compare each artist’s top five most viewed videos to their top 30, only Cyrus and Bieber (and to a lesser extent, Lady Gaga) receive significantly worse ratings on their most popular videos. It’s tough to explain why this is, but it’s possible that their less-known songs (or derivative works not produced by the artist, which are also included in search results) are actually preferred to the big hits. Conversely, it’s also possible that a strong dislike of a few popular songs drags down artists' other work, even if those songs are fairly innocuous. (Or, or course, they could just be producing bad music.)

Cyrus hasn’t always been at the bottom of this list, however. For most of her career, Cyrus' videos have received decent scores. But things went south in 2013 - videos uploaded this year have average scores that are a half-point lower than the average of all her previous work.*

Fortunately for Cyrus, there’s some evidence that artists can recover from the YouTube trolls (who are, after all, the ultimate measure of a musician’s career). After his arrest in early 2009, Chris Brown’s videos became similarly unpopular, but were able to recover within a fairly short period. (We sadly can’t compare Miley struggles to Britney Spears' classic meltdown, which predated YouTube.) 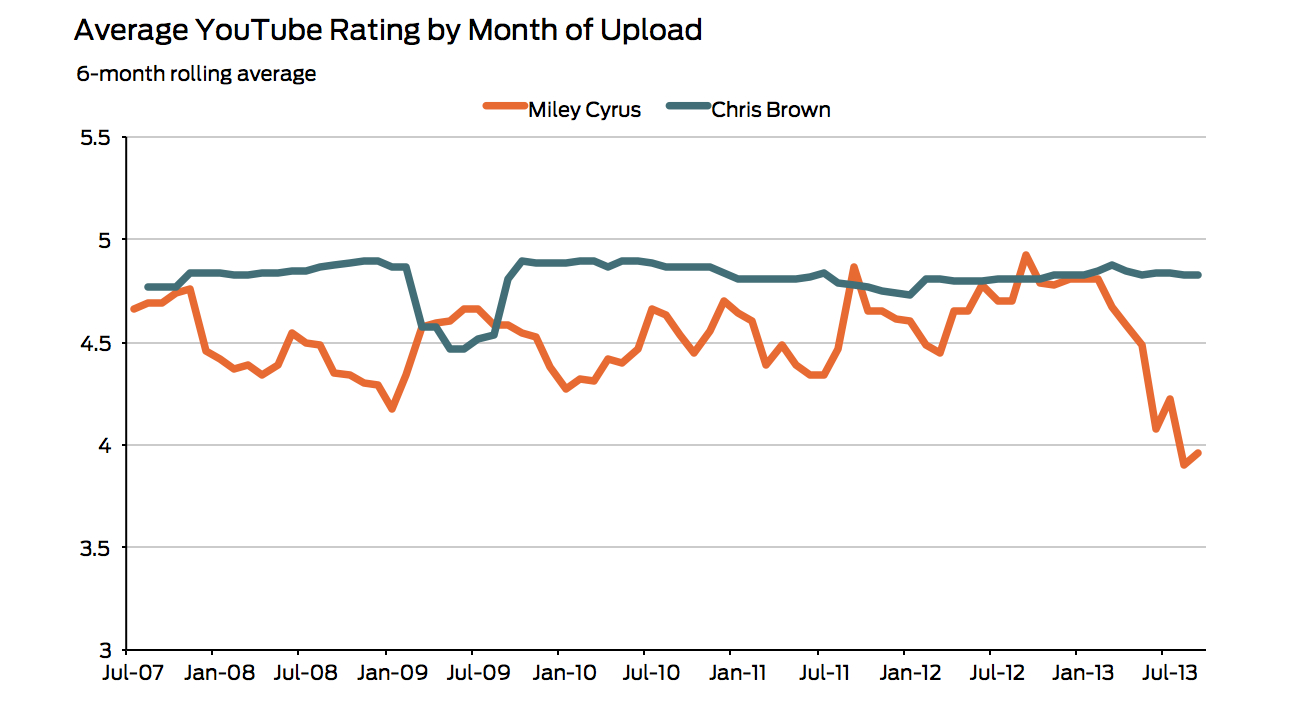 Always gonna be an uphill battle

Combined with an ever-growing YouTube audience and a world’s seemingly insatiable appetite for viral videos, there may be hope for Miley Cyrus yet. (Whether there’s hope for the rest of us is a different question.) But in either case, even if this is the beginning of the end for Miley, at least she inspired this:

YouTube data was collected using a Python scraper. This scraper can be adjusted to return results for different artists, or any search term. The data was manipulated using SQL. (This was written for a MySQL database, which creates some complications. Most other flavors of SQL have ROW_NUMBER functions, which would make the queries more straightforward.) All of the charts were created in Excel.

All of these files can be found in this Github folder.

Are there questions you’re interested in exploring? We're always looking for new datasets and cool problems to write about. If you have questions that you think could be answered with data - on topics ranging from San Francisco parking to Hyperloops and fantasy football - feel free to send us your questions at benn@modeanalytics.com.

* YouTube used to allow users to rate videos, and now bases ratings - I believe - on likes and dislikes. This could create a discontinuity that muddles direct comparisons between videos from different years, though the distortions should be fairly small.