Note: Mode is free to any researcher or organization working with public health or epidemiology models. Same if you’re coordinating logistics for a food bank, or any org fighting #COVID19 from the front line. Send ’em here: hi@modeanalytics.com.

For most of my life, I’ve assumed that sailboats are beholden to the impulses of the wind—their sails catch the wind, and they go whichever way it’s blowing.

This, I recently learned, is not how boats work (I learn some things late). It turns out that sailboats can in fact travel in nearly any direction in nearly any wind, including directly into it.

The physics of this still make little sense to me—but I love the analogy. First, as a reminder of limits: making progress depends on identifying, but not trying to control, the wind. Second, as a reminder of possibility: no matter the conditions, you can move forward with the right positioning of your sails.

These lessons have been particularly helpful over the last month. The world has changed a lot, and not much of it has been for the better. The coronavirus crisis—arguably the biggest and most watched news story of all time—has moved from a health crisis to an economic crisis to an all-out societal crisis. As country after country ordered people to stay home, the world now literally looks ways that were unimaginable just a few weeks ago.

This challenges us as people and members of our communities, but the adjustments to this wind are clear: Health and safety first; all else is a distant second.

The coronavirus crisis will also challenge us as a company. Mode can’t contract the virus, but the business can certainly get sick. After benefiting from years of economic tailwinds, startups around the world now have to identify and navigate the strongest headwinds in at least a decade.

Before making adjustments, we need to understand the state of the economy and develop a plan for tracking how it’s changing. In a previous life, I worked as an economic analyst studying the 2008 financial crisis, making me the closest thing to an economist at Mode. So when this crisis hit, I was tasked with measuring the wind.

In the spirit of not working alone, and to help others think about how to position their own sails, this is our assessment.

Taking stock of the economic effects of COVID-19

On February 19, just as the coronavirus was starting to spread beyond China, the S&P 500 closed at 3,386, its highest level on record.

Within three weeks, COVID-19 spread to 119 countries, the World Health Organization declared it a global pandemic, and the S&P 500 fell by 20%. This drop, which officially ended one of the longest bull markets of all time, was the steepest crash in history, reaching the 20% mark nearly twice as fast as the famous crashes of 1929 and 1987.

In the weeks since, the market has careened wildly, recording the five biggest one-day losses and the five biggest one-day gains in the market’s nearly 100-year history. From February 21 to March 20, the S&P 500 recorded a four-week decline of over 31%, the largest such drop since the Great Depression. If pandemic maps have become the face of the health crisis, the stock market’s convulsions have become the face of the economic one.

Granted, the stock market is not the economy, but the indicators that are the economy—unemployment, GDP, business activity—are also blinking red.

Weekly jobless claims, which measure how many people file for unemployment insurance and are a leading indicator of unemployment, jumped 70% last week, from 211,000 to 281,000.

This could be a precursor to something historic this week. Goldman Sachs estimates that the next report will reveal 2.25 million new claims, nearly three times higher than the previous record of 695,000 in October 1982. Other analysts expect an even bigger hit, forecasting as many as 5 million new claims (Update: On March 26, the Labor Department announced 3.28 million new claims, 2.5 million more than the previous record.) Some economists are expecting the unemployment rate to surge from 3.5% to over 10%. For comparison, 10% is where unemployment peaked during the Great Recession—and it took nearly two years to get there. In this crisis, that rise could take just a few months.

The same forces that drive unemployment through the roof may drive economic production through the floor. As the crisis has deepened, economists have rapidly downgraded their projections for GDP growth. For example, Wells Fargo’s expectations for U.S. GDP growth in Q2 fell from 2.4% in late February to –3.3% on March 20. 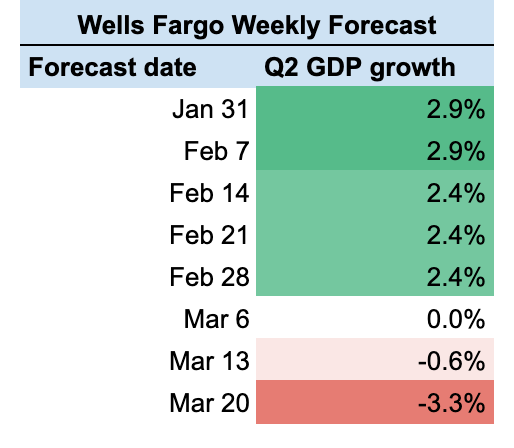 Even this projection could still be wildly optimistic. Some forecasters are expecting a decline of 12%. Goldman Sachs predicts a drop of 24%. This is three times worse than the steepest drop during the 2008 recession, and more than twice as bad as the worst quarterly drop since the Great Depression. 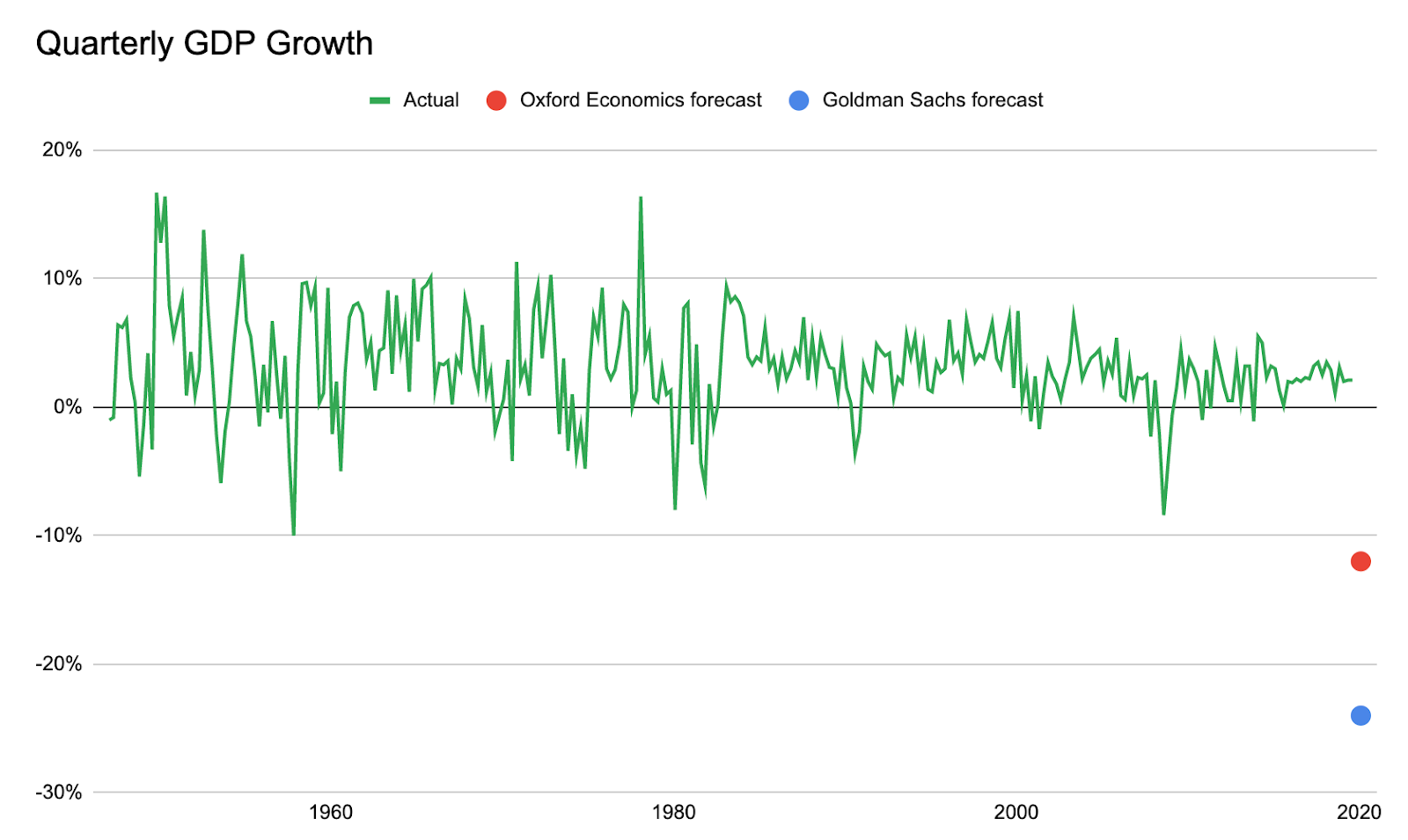 These numbers are bad—looks like a spreadsheet error bad; video game numbers bad; the worst economic quarter in modern U.S. history bad. In other words, as Credit Suisse recently put it, “Economic data in the near future will be not just bad but unrecognizable.”

Based on these numbers, there’s little doubt that we’re already in a recession, and a deep one at that. The question is now how long will it last.

On one hand, deep recessions aren’t often followed by a fast recovery: the median time for returning to pre-recession levels of economic activity is 18 to 24 months; stock market recoveries take a similar amount of time.

On the other hand, “unprecedented” is a double-edged sword. With nothing to compare this decline to, we don’t know what happens next. The nature of the current recession—mandated government shutdowns of business activity—is also unique. If and when the health crisis abates, large parts of the economy may simply turn back on.

Some economists are optimistic, expecting the “downturn to be brief… with the worst news front-loaded,” but the prevailing sentiment is uncertainty. Today’s crisis is driven by a highly uncertain epidemic that could last several months to several years; its death toll could range from several thousand to over a million; it could decline in the summer; it could return in the fall; and it could be resolved by a cure we haven’t yet discovered.

Policy makers—and President Trump in particular—compound this uncertainty. Trump’s stance on the crisis is erratic; his administration’s contradictory. This is particularly damaging in response to a health crisis that requires coordinated action to solve.

Volatility indices, which measure market uncertainty, reflect this anxiety. S&P 500 volatility, Treasury note volatility, and oil price volatility are all at or above their 2008 peaks.

Positioning our sails for unpredictable winds

First, we acknowledged the winds we’re facing aren’t just strong, but also unpredictable. We know we’re facing a sharp economic downturn, and we don’t know how long it will last. We could make our own prediction, but we’re not smarter than the market—and the market doesn’t know when this is going to end. Rather than prepare for one scenario, we need to prepare for several.

Using others’ forecasts as guides, we’ve developed three scenarios to serve as our baselines:

Second, we built a way to measure the wind. We’ve developed daily indicators of economic activity to track the pace of the recession and recovery. The next two months of weekly jobless claims (every Thursday), unemployment numbers (April 3rd and May 8th), Q1 GDP estimates (May 28), and private sector forecasts (e.g., Wells Fargo forecasts every Friday) will reveal a lot about the nature of the recession we’re facing.

By May or June, the depth of the recession will be coming into view, and our focus will turn to evaluating the pace of recovery. The same indicators are useful here, as is the pace of the stock market recovery, the growth of coronavirus cases in the United States, market volatility indicators, and surveys of consumer and business confidence. Sharp positive changes would indicate a potentially faster recovery.

All of these indicators are collected in a single place that we update daily. We now combine this view with internal leading indicators that could be affected by a recession—new sales conversations, visits to marketing sites, median sales cycle—providing a daily picture of how the economy is changing, and how those changes are affecting Mode.

Third, we want to adjust, but not overreact. To keep ourselves from overreacting to small changes, we map daily economic and internal changes to our three scenarios. For the time being, we plan on making adjustments not to fit each change, but to fit the scenario we view as most likely. By collapsing down the number of possible outcomes to a manageable set, we can stay responsive while discouraging ourselves from making damaging knee-jerk reactions to particularly good or bad blips in the data.

As we move into strong headwinds and trying times, we should remember the wisdom often repeated by pioneering technologist and pioneering sailor Grace Hopper:

A ship in harbor is safe, but that is not what ships are built for.

We build companies to solve problems. While the particulars of the coming storm may be unprecedented, the scale of the challenge is not. As long as we sail together and focus on changing our sails and not the wind, we'll ride this out together.

Visual Explorer for Executives and Stakeholders